My colleagues at the furniture store in Namsos, ready to party. That was an interesting night, indeed. The guy in the left corner of the picture even managed to fall 3 meters down into the sea without anyone noticing… Hm… Anyway, the pic is taken sometime in 2006 I think. 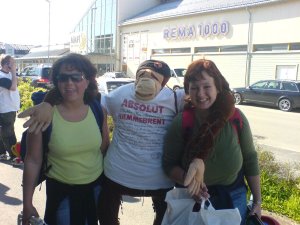 Let’s just say I pass it on to anyone who wants to do it. Kind of fun actually!
The rules are: pick the sixth picture in your sixth picture file (no picking, just the sixth one!) and write a bit about it. No cheating!

As some of you might have noticed I’ve gotten this one before, and the picture was different that time. I’m not cheating, it’s just that I have several different picture storing systems, depending on what camera was used etc, so this one is from the cell phone pictures file pile 🙂